Where’s the Beef? Employers Question the Value of Hospital Mergers 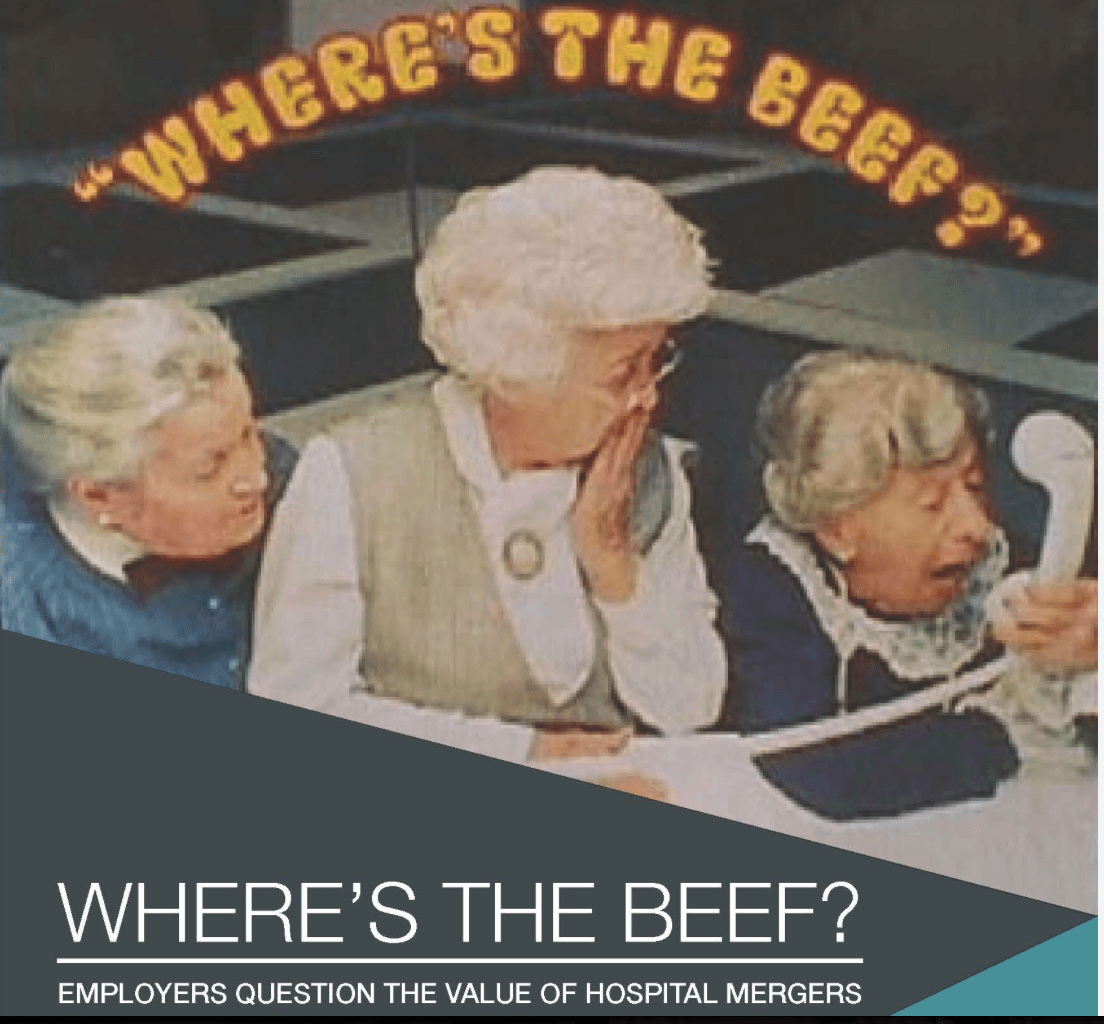 In an iconic 1984 commercial for Wendy’s hamburgers, the diminutive octogenarian Clara Peller and two friends are eating hamburgers at the fictional “Home of the Big Bun.” Disappointed by their burgers’ small size, the friends call customer service and Clara demands to know, “Where’s the beef?”  The slogan went viral and propelled sales at Wendy’s upward by 31%.

Former Vice President Walter Mondale repurposed the phrase to question the depth of Gary Hart’s policies during the 1984 Democratic primaries and became the party’s nominee for President. The director of Clara’s commercials (Joe Sedelmaier) observed at the time, ”If Walter Mondale could have said the line like Clara, he would have been our President.”[1] Instead he lost to Ronald Reagan in one of the most lopsided presidential elections in U.S. history.

“Where’s the Beef?” still resonates and could headline the results of the just-releasedMidwest Business Group on Health’s (MBGH) survey of large employers. Employer skepticism regarding hospital mergers is part of the larger societal narrative questioning healthcare’s increasing costs and relative value.

Health systems are losing the battle for the public’s “hearts and minds.” As the post-reform transformation of U.S. healthcare progresses, the biggest challenge confronting health system leaders may be convincing Americans that their hospitals are “delivering the beef.”

The “Pictures” in Employers’ Heads 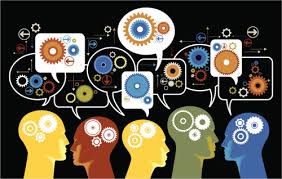 Any retail executive will testify that the “pictures” in customers’ heads drive sales: their brand perceptions; their value assessments; their shopping experiences; their wants, needs and desires.

That’s why consumer companies invest so heavily in surveys, focus groups and engagement programs. The better they understand the “pictures” in their customers’ heads, the more effectively they can design and deliver desired products and services.

Healthcare is unique among industries because its principals execute transactions without customers. Patients visit doctors who prescribe treatments and receive payment from third-parties.

With guaranteed payment for their companies’ services, health system executives have not needed finely-calibrated “antennae” to assess consumer sentiment. Most lack the retail mindset required to connect with customers. This is a substantial liability as healthcare becomes more consumer and value-oriented.

Health systems optimize revenues by offering services in facilities that attract commercially-insured patients. Employers fund the vast majority of commercial healthcare spending. Their contracts pay substantially more per case than Medicare and are lifeblood for providers.

Other than shifting health insurance costs to their employees, self-insured employers have had little alternative but to accept prevailing market prices for healthcare services. This is changing.  Employers increasingly expect more “value” for their healthcare expenditures.

As a consequence, health system executives must understand, acknowledge and act upon the “pictures” in employers’ heads. Right now, those pictures aren’t always pretty.

Throughout the country, non-profit business associations have emerged to help employers optimize healthcare benefits and services. MBGH is one such organization. Its membership includes over 125 self-insured companies that provide health insurance to over 4 million individuals and spend more that $4 billion annually on healthcare benefits.

The survey’s results suggest that large employers have a skeptical, even cynical opinion of  hospital consolidation. Employers hear the messaging that larger scale creates efficiencies and generates economies. They just aren’t buying it. Like many others, they believe hospitals merge to increase their negotiating leverage with payers.

This negative impression of their motivations carries extreme danger for health systems.

Whenever possible, health systems locate facilities in affluent areas to attract more commercially-insured business. As a consequence, hospitals with the most commercial contracts have the most to lose if employers pursue expense-reduction strategies.

This is happening more quickly than health system leaders realize. The MBGH survey also found that the percentage of large employers planning to pursue direct contracting with hospitals for one or all hospital services jumped from 5% in last year’s survey to 24% this year. 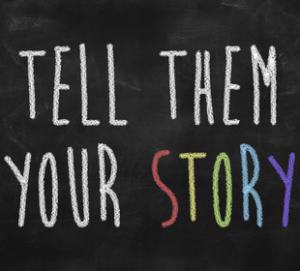 This growing wariness expresses itself in multiple ways. In Congress, there is strong bi-partisan support for reining-in hospital expenditure. For example, the Bipartisan Budget Act of 2015 eliminated hospital-based pricing in newly-acquired or constructed outpatient facilities.

In the corporate sphere, large companies are pursuing direct contracting, narrow network and bundled-payment initiatives to reduce healthcare expenditure. Boeing is running a competition between two large health systems for the care of its Seattle-based workforce. The Pacific Business Group on Health contracts with four health systems nationwide for select orthopedic procedures at predictable and transparent prices.

Provider mergers and acquisitions, in particular, spark contention. Multiple research studies, including a recent analysis by Northwestern’s Kellogg School of Business, conclude that hospital mergers result in higher prices. Within this context, the MBGH’s survey results are consistent with the broader, increasingly negative perception of hospital consolidation.

Despite this negative sentiment, health system leaders believe they require larger scale to deliver integrated care services with better outcomes, greater convenience and lower costs. To achieve greater scale, health companies must overcome negative public sentiment by reshaping the public narrative. This can only happen when health systems are honest, transparent and accountable.

In essence, health systems must both speak and live the truth. Three examples highlight how to do this:

These types of tangible public commitments to efficient, integrated healthcare can galvanize public support. They align intent and performance. They improve public perception. They reinforce organizational integrity. They alter the terms of the public debate. 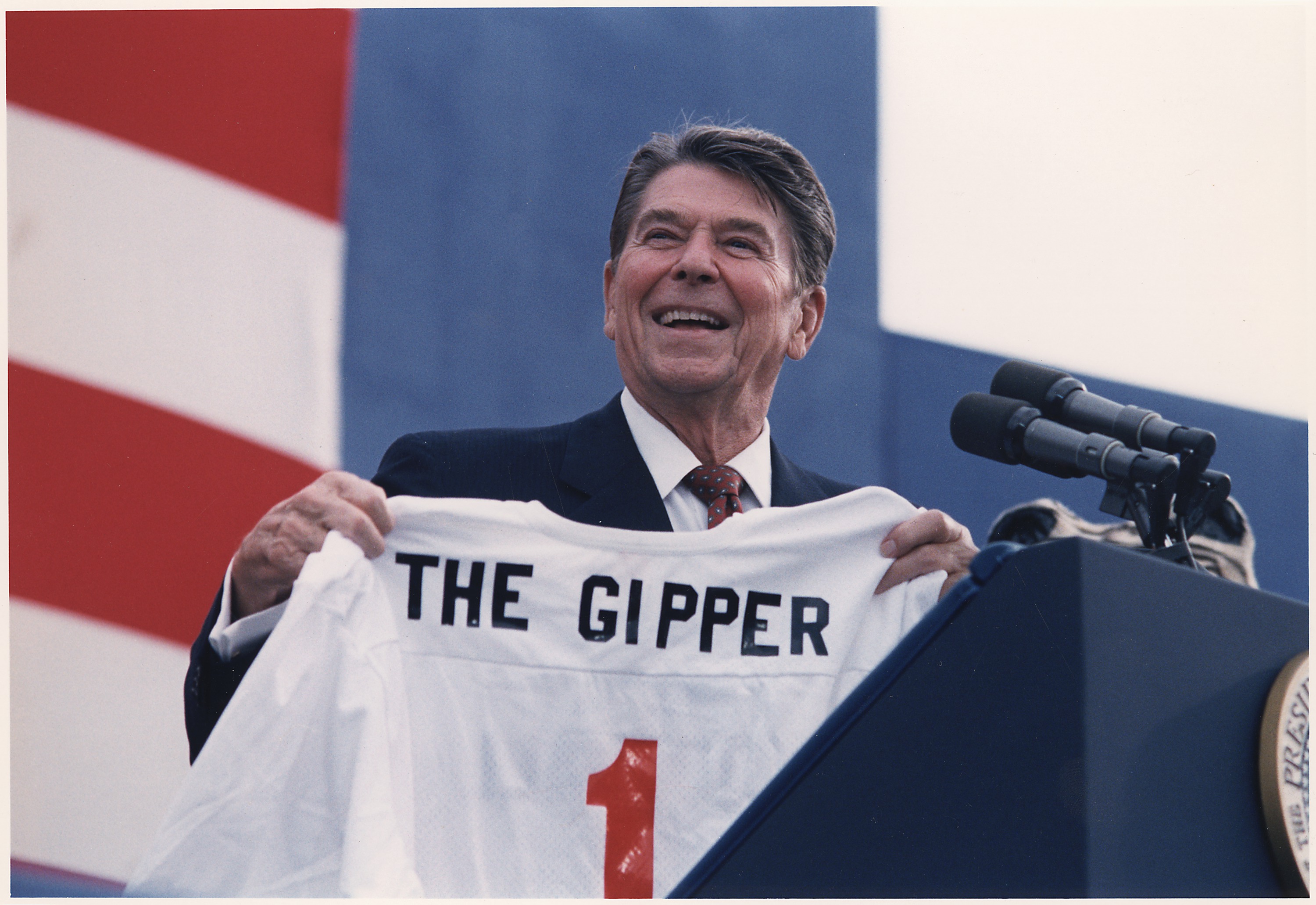 uring the first Reagan-Mondale debate, President Reagan gave rambling and often incoherent responses. Many wondered if he’d grown too old to remain president. Reagan’s post-debate poll numbers dropped by 7 percentage points.[2]
He overcame his dismal first performance during their second debate by delivering one of the best moments in presidential debate history,

“I will not make age an issue in this campaign. I will not exploit, for political purposes, my opponent’s youth and inexperience.”Even Mondale laughed. For all intents and purposes, Reagan’s quip ended concerns regarding his executive fitness and sealed his re-election.

The great communicator knew something about gaining and keeping people’s trust. First, they have to like you. Second, they have to believe you.

This is a “second debate” moment for health system leaders. They must find ways to convince employers, government officials and consumers that their companies can deliver better and more convenient healthcare services at lower prices. They need to earn the public’s trust.

In response, health systems must trust and deliver. When the “Clara Pellers” in every American community search for healthcare value, they must “find the beef.”