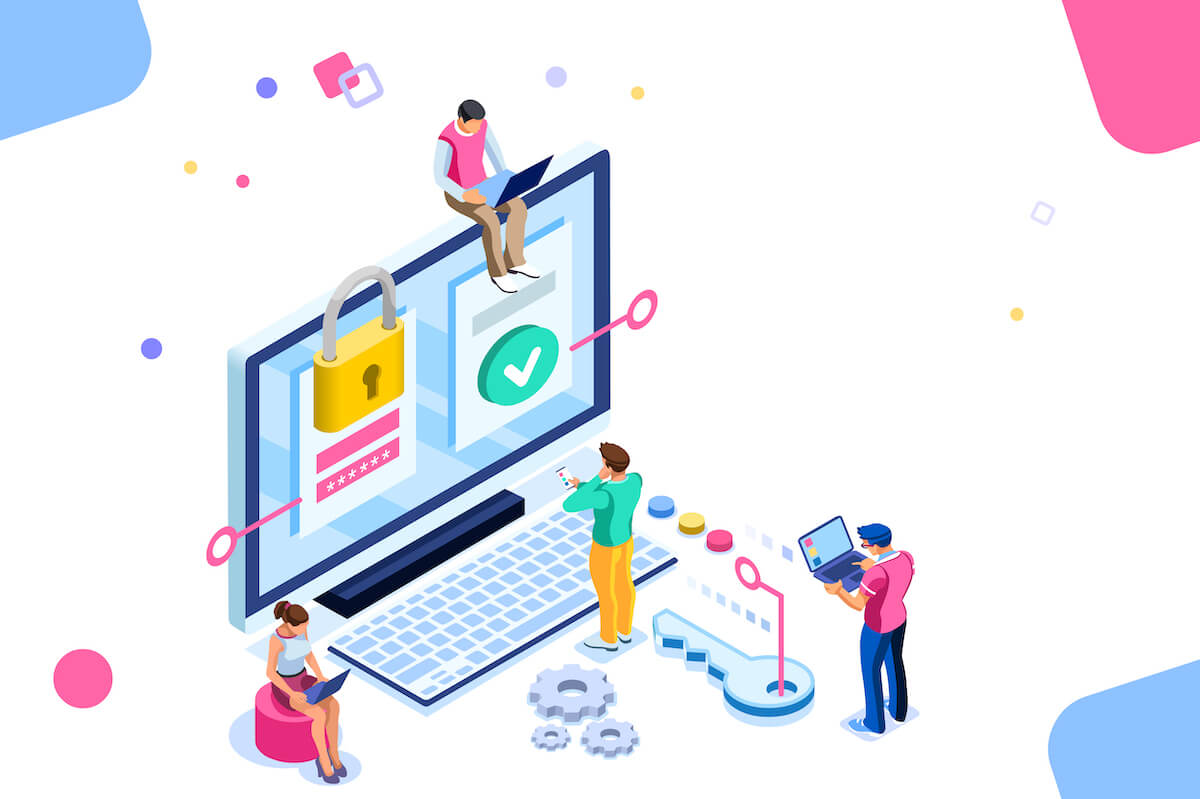 The gloves are off and the big guns are out. Epic Systems Corporation, the nation’s largest EHR vendor, is applying every fiber of its corporate being to dilute the government’s well-crafted data interoperability rules before they become final. Most believe HHS will issue the new rules this month, February 2020.

Under the banner of patient safety, Epic’s normally taciturn CEO Judy Faulkner has stepped out of the shadows to persuade health systems to join her cause.[1] She contacted leading health system CEOs in January 2020 to request that they co-sign a letter to HHS Secretary Azar requesting a delay in finalizing the proposed rules. Faulkner employed strident language in making her case,

We are concerned that health care costs will rise, that care will suffer, and that patients and their family members will lose control of their confidential health information.

With $3 billion in revenues, 10,000 employees, over 160 hospital clients and an operating system that touches 40 percent of the American population, Epic wields enormous influence over the market, patients and public opinion. Like many corporate behemoths, Epic also has the hubris to conflate its interests with patient interests.

Ironically, it is the current fragmented system of patient data collection, curation and application that delivers suboptimal care outcomes, frustrates both practitioners and patients, complicates standardization and limits innovation. Epic’s insistence that its organization of source patient data is proprietary information may be the single largest impediment to liberating patient data.

For those who would like more information on the details of the proposed interoperability rules and data blocking, along with a description of current industry practices that limit the exchange of patient data, please read my March 26, 2019, commentary “Interoperability Battle Lines: Data Freedom Fighters vs. Entrenched Data Blockers.” Today’s commentary will explore how a monied interest (Epic) combats progressive, pro-market regulatory reforms.

My latest book, The Customer Revolution in Healthcare: Delivering Kinder, Smarter, Affordable Care for All, identifies a massive Healthcare Industrial Complex as the root cause of the U.S.’s high-cost, fragmented delivery system. This “System” enriches itself at the expense of the American people. Its incumbents operate business models that increase costs without improving health outcomes or overall societal health.

There are hundreds, if not thousands, of micro-economies in healthcare where healthcare companies exert monopoly pricing power. Epic is an example of a monopolistic company within the $30-plus billion[2] EHR micro-economy. The System’s key players rely upon lax and beneficial regulation to optimize their market positions and profitability. In opposing the new interoperability rules, Epic is first and foremost pursuing its own financial interests. 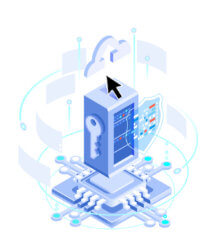 The Oxford dictionary has the following two very different definitions for the noun “audacity.”

After earning a graduate degree in computer science from the University of Wisconsin in the 1970s, Judy Faulkner exhibited the first type of audacity. She and a dozen fellow programmers pooled their money to launch Epic in Faulkner’s basement.[3] This is the bold, risk-taking type of audacity people admire and applaud.

Faulkner and her colleagues had the audacious belief that they could create a digital longitudinal medical record that could track patients’ medical activity across inpatient, ambulatory and insurance environments. And they did, using a 30-year old programming language called M (formerly MUMPS). Epic software still runs on M today. 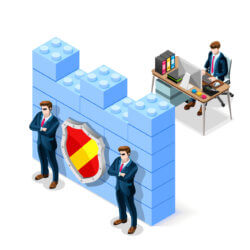 Building on programming initiated at Massachusetts General Hospital (where MUMPS originated) and with a $40 billion assist from the federal government[4] (since 2010) to fund the creation of electronic health records, Epic has emerged as the clear market leader. The company administers over 50% of the nation’s patient records.[5] It is the EHR that most major health systems employ.

Today, more often than not, Epic exhibits the second form of audacity. It pursues its corporate interests with limited regard for others. This is the brazen, shameless type of audacity we, the people of America, deride and fear.

Epic restricts innovative companies from accessing source patient data to build vital apps that could improve care outcomes and delivery efficiency. Epic crushes today’s young Judy Faulkners and their upstart health companies before they emerge from their own basements.

Epic forces companies that participate in its App Orchard to share aspects of their intellectual property while preserving Epic’s rights to develop similar technologies. Although Epic says publicly it does not own the patient data that resides in its systems, the practical impact of its contractual restrictions and practices in the marketplace is that Epic maintains de facto control over health systems’ ability to share patient data with other vendors.

Despite this autocratic control, the industry has not received commensurate gains in efficiency. Still running on M, Epic’s data platform is cumbersome. It requires enormous effort to clean and normalize data for system application. It is time-consuming and expensive for health system clients to make even routine template changes.

Increasingly Epic expects health systems to align their data semantics to Epic, not the reverse. Atul Gawande noted this in his insightful New Yorker article, “Why Doctors Hate Their Computers.”

But three years later I’ve come to feel that a system that promised to increase my mastery over my work has, instead, increased my work’s mastery over me.

Gawande is hardly alone among physicians in castigating EHRs. A recent study found 70% of physicians suffer stress related to health IT usage.[6] Epic and other EHR vendors have become a form of Star Trek’s Borg, a collective organism that acquires knowledge and technology from external sources and then forcibly assimilates their clients into its drone army.

The emergence of EHRs has increased burnout among frontline caregivers.[7] They can’t keep up. Epic is the architect and administrator of their daily trauma. Epic apparently believes it is the answer to healthcare’s fragmentation. Audacity, thy name is Epic.

In February 2019, HHS’ Office of the National Coordinator of Health IT and CMS issued its proposed new rules for data interoperability, restrictions against data blocking and patient access to their health records. 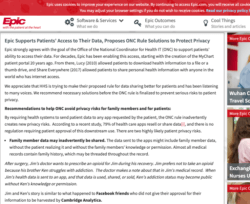 The rules took two years to draft. They implement a clear statutory mandate under the 21st Century Cures Act, which received broad bipartisan support and was signed into law in December of 2016. The rules are comprehensive and thoughtful. If implemented as initially drafted, these new data usage rules will stimulate game-changing innovations that will save lives, minimize errors, reduce caregiver stress, lower costs and enhance consumer experience.

Epic has opposed the proposed rules from the moment of their release by ONC and CMS. It is particularly ironic that Epic is leading the charge against the new data-sharing rules when it owes so much of its corporate success to the federal government’s investment in EHR technologies.

Epic is the ringleader for the Electronic Health Records Association that requested and received a 30-day extension to the comment period. In responding to the proposed rules, the EHRA questioned whether the proposed two-year implementation period will be sufficient. EHRA also warned of unintended negative consequences associated with rule implementation.

Despite a vigorous lobbying effort, HHS has remained committed to issuing the new rules in close to their original form. It is for this reason that Epic has increased its lobbying pressure. In addition to Faulkner’s letter to health system CEOs, Epic has undertaken the following initiatives to distort, delay and/or derail these new data rules.

Epic has rolled out a major publicity campaign in Metro Washington, DC to influence lawmakers. The company is working hand-in-hand with other heavyweight advocates, including the American Medical Association, to make the case that the proposed rules will harm patients.[8]

Thompson penned an op ed in the Wisconsin State Journal singing Epic’s praises and warning that the proposed new rules would damage both Epic and the Wisconsin economy. In a world where up is down and black is white, Thompson claims the new rules would force Epic to share its hard-earned intellectual property with competitors.

Epic is devoting its entire homepage (as of Jan. 30) to suggest “solutions” to improve the proposed data-sharing rules. Its homepage includes a hypothetical “Jim and Ken” case study where an unregulated app publicly reveals Ken’s opioid usage through Jim’s medical record. Epic compares this to the Cambridge Analytica-Facebook scandal.

A second hypothetical case study illustrates how an unregulated wellness app receives the totality of Liz’s lab results when Liz thought she approved just the release of her cholesterol levels. In both cases, Epic positions its actions as stepping up to protect the vulnerable public.

We have always, and will always, support patients’ right to use their data as they see fit. However, it is the role of government to ensure that patients have the information they need to make those decisions knowledgeably, like they have for nutrition and food or labels in the clothes they buy. Patients must be fully informed about how apps will use their data, and apps and other companies must be held accountable to honor the promises they made to patients.

In a recent interview with Politico, Faulkner suggested that Epic would sue the federal government if her company finds the final rules objectionable.[9] Jeff Smith of the American Medical Informatics Association observed in an interview that he’d “never heard of organizations threatening to sue ONC before.”[10]

In a keynote address at the ONC’s annual meeting[11] on Jan. 27, Azar declared that “scare tactics” would not prevent HHS from implementing necessary reforms. Azar might have had Epic in mind when he made the following observation,[12]

Health records today are stored in a segmented, balkanized system. Unfortunately, some are defending the balkanized, outdated status quo and fighting our proposals fiercely. But defending the current system is a pretty unpopular place to be.

The moment of truth has arrived. Despite intense pressure, HHS appears prepared to move forward with its constructive rules to improve data interoperability, prevent inappropriate data blocking and grant better patient access to their health data. More power to them.

Like all data, health data wants to be free, free-flowing and protected. It wants to move to the places where it can have the most positive impact. Pro-market regulations like the datasharing rules proposed by HHS level the competitive playing field, stimulate innovation and create value. They will make healthcare better.

Once implemented, the new rules will improve health outcomes and service delivery while protecting patients’ privacy. As that occurs, let’s hope that Epic has a Plan B to revolutionize its EHR platform and reduce the burden its products currently impose on consumers and clinicians. Technology should make life easier and better. That’s the American way.

Join The Customer Revolution in Healthcare

Read about today’s revolutionary forces and leaders in David Johnson’s latest book, The Customer Revolution in Healthcare, available for purchase on RevolutionaryHC.com. 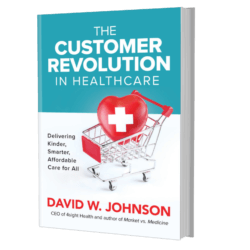