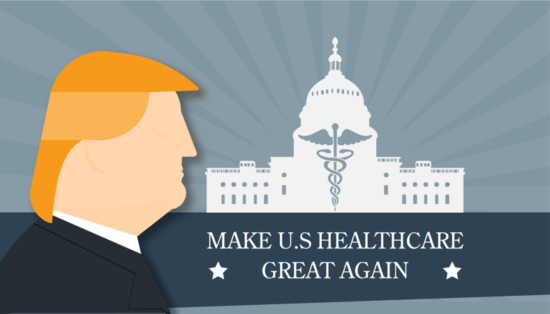 Last Friday was supposed to be the shootout at the healthcare corral where Republican gunslingers were going to take the first major step toward repealing Obamacare. Instead legislators retreated to their offices with no shots fired.

The AHCA is dead for now. May it rest in peace. President Trump tried it Speaker Ryan’s way and supported a healthcare reform bill with a miniscule 17% public approval rating. By contrast and for the first time, a majority of Americans expressed approval for Obamacare.[1]

“Don’t it always seem to go that you don’t know what you’ve got ‘til it’s gone.”[2] No wonder Ryan couldn’t win enough votes for AHCA passage.

Politics is the art of the possible. The stark reality is that President Trump currently has no governing coalition, but there is a silver lining. The loss liberates Trump from conservative orthodoxy to pursue more moderate and populist healthcare reform.

There’s a deal to be had and Trump, the consummate deal-maker, can pull the levers to make it happen. In the wake of a tough defeat, radical moderation is the right political response for Trumpian healthcare. 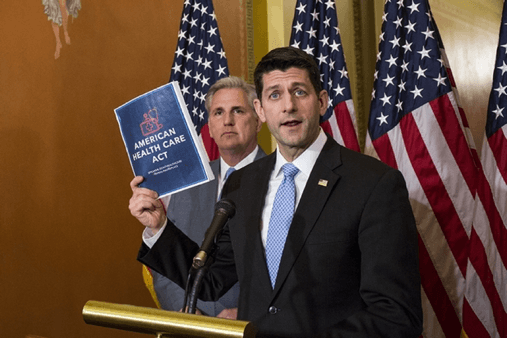 The Republican leadership has waged war against the Affordable Care Act (ACA) since its 2010 passage. Republicans campaigned against Obamacare in four subsequent elections and pledged its repeal if given the chance.

Consistent opposition worked. Republicans gained control of Congress and won the Presidency. With Obamacare’s fate firmly in their control, Republicans made its legislative repeal Job 1.

The AHCA’s demise weakens an already-unpopular Trump administration and reveals deep policy fissures within Republican ranks. Legislative passage of the AHCA also carried enormous political risk. Millions of Trump voters would have lost their health insurance under the proposed legislation.

President Trump had assured the public that he wouldn’t cut Medicare and Medicaid. He further pledged that the American people would have greater access to healthcare services at lower costs.

It’s ironic that the populist Trump championed a bill that the CBO estimated would cause 24 million Americans to lose their health insurance, including disproportionate numbers of his own ardent supporters.

Paraphrasing George Washington’s advice to a young Alexander Hamilton in the blockbuster play Hamilton, “Critiquing is easy. Governing is harder.” Speaker Ryan said as much in short remarks after pulling the AHCA bill, “Moving from an opposition party to a governing party comes with growing pains…Doing big things is hard.” 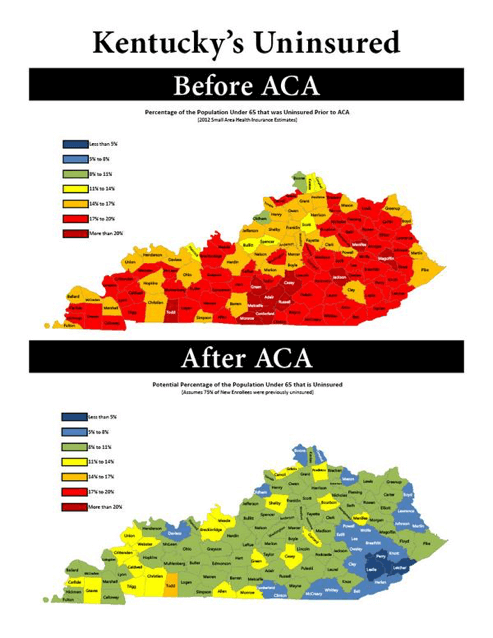 President Trump travelled to Louisville, Kentucky the Monday before the scheduled vote to rally support for the AHCA. In a National Public Radio interview preceding the rally, Representative James Comer observed that Trump had “won Kentucky by the biggest margin of any presidential candidate in history” and that his Western Kentucky “district had the highest number of people that got on expanded Medicaid of any congressional district in America.”

Despite its deep cuts to Medicaid, Representative Comer believed Kentuckians would support AHCA. Conservative Republicans, like Comer, believe access to healthcare services is principally an individual responsibility, not a right of citizenship. Had the AHCA become law, there would have been “winners and losers.”

Congressman Comer understood the tradeoffs, “Kentucky has a third of its population on Medicaid… some people benefited [from Obamacare] and many didn’t… When you get on Medicaid, you essentially get free health care, but the other side of the coin is somebody’s paying for that free health care.”

No state more than Kentucky embodies the contradictions embedded within the current healthcare debate. Kentucky clearly loves Trump, but it’s less clear that they would embrace Republican-led healthcare reform. Why? Kentucky arguably has benefited more than any other state from Obamacare.

The Commonwealth Fund’s just-released healthcare scorecard noted that Kentucky “stood out for having improved on more measures than any other state.” Kentucky jumped from 47th in the scorecard’s 2015 state health rankings to 39th in this year’s rankings.

Repealing Obamacare and replacing it with the AHCA would have reversed Kentucky’s improving health metrics. With less health insurance coverage, Kentucky’s citizens would be sicker, more isolated and less productive. What is true for Kentucky is true for the nation. 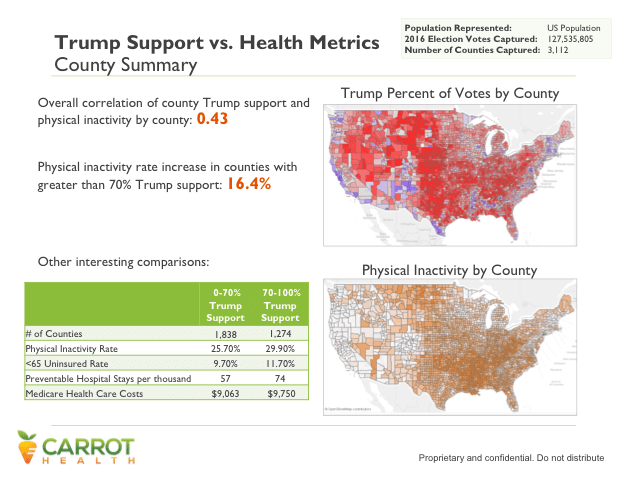 Despite their professed opposition to Obamacare, Trump supporters have a disproportionate need for healthcare services. 4sight Health and Carrot Health have collaborated on a detailed health metrics analysis of Trump voters.

Carrot’s “Physical Inactivity” score is a powerful predictor of chronic disease, premature mortality and health expenditure. Physical Inactivity is a model of the percentage of adults reporting no leisure-time physical activity.

If healthcare insurance coverage declines in these pro-Trump counties, these negative behavioral, treatment and cost trends will amplify. President Trump owes his loyal supporters and all Americans better healthcare, not less healthcare. 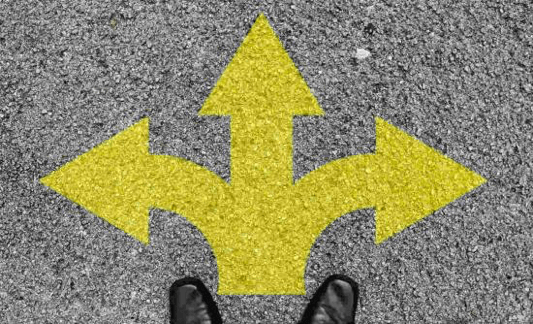 Healthcare’s white-hot policy debate centers on achieving appropriate balance between individual responsibility and governmental obligation in the provision of healthcare services. There are strong voices on both sides of this debate – from the Republican Freedom Caucus that wants full Obamacare repeal to Bernie Sanders Democrats that favor a single-payer Medicare-for-all system like Canada’s.

Lost amid the politics are millions of vulnerable Americans without the means and resources to navigate a complex and highly-expensive healthcare delivery system. While far from perfect, Obamacare provided healthcare access to many marginalized Americans for the first time.

While Obamacare improved healthcare access, it has not cut healthcare spending. It continues to spiral upward. The U.S. already spends almost double per-capita what other advanced economies on healthcare.

Partisan healthcare reform programs, like the AHCA and the ACA, are always endangered species. Senator Patrick Moynihan observed that major social change requires the support of at least 70% of the American people. It’s time to try an honest bi-partisan approach.

President Trump should create a bi-partisan task force to tackle healthcare reform. Find political heavyweights (e.g. Mitt Romney and Tom Daschle) to lead the effort, work with his administration and hammer out new legislation that could pass both houses of Congress with sizable majorities.

Is there a better way to make America great again?