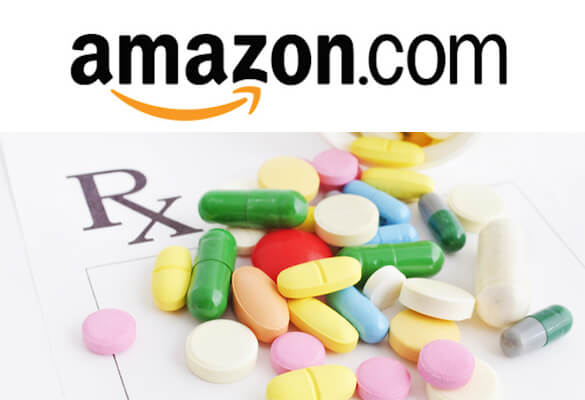 Sky-rocketing drug prices have captured the nation’s attention. President Trump echoes Senator Bernie Sanders when he asserts that drug companies are “getting away with murder.”[1] Republican and Democratic legislators alike assert that the pharmaceutical industry engages in price-fixing and advocate that Medicare should negotiate directly with drug manufacturers to lower costs.

In May 2017, CNBC reported [2] that Amazon was actively evaluating whether to enter the pharmacy business. CVS and Walgreens share prices fell on the news. In recent Q2 earnings calls, CVS, Walgreens, Express Scripts, McKesson and Cardinal Health all acknowledged the threat Amazon poses to their businesses. In fact, the impact is already happening as the combined market value of these 5 companies declined over the past year by $43.5 billion.[3] Amazon has made a habit of disintermediating “middlemen.” Watch out PBMs, insurers, wholesalers and retailers: Amazon-like competitors prey on market inefficiencies. They achieve market discipline the old-fashioned way – by delivering better value to customers.

The pharmaceutical industry is vast, heavily-regulated and dizzyingly complicated. Multiple intermediaries drive up costs as drugs make their way from manufacturers to patients. Intermediaries include pharmacy benefit managers (PBMs), health plans, wholesalers and retail pharmacies. They fight for their piece of the $425 billion[4]pharmaceutical pie.

Drug pricing is opaque. Mylan CEO Heather Bresch made this point last summer when she was on the hot seat for the astronomical cost of an EpiPen 2-pack.[5] Despite no material improvement in EpiPen’s efficacy, Mylan had increased its price 550% price (from $94 to $608) after acquiring EpiPen in 2007.

Bresch used the chart below to illustrate that pharmaceutical “middlemen” capture over half ($334) of the EpiPen’s $608 retail price without public disclosure of each component’s individual cost. This represents a massive “system tax” on EpiPen consumption. Of course, this tax applies broadly to all pharmaceutical consumption, particularly for branded drugs. 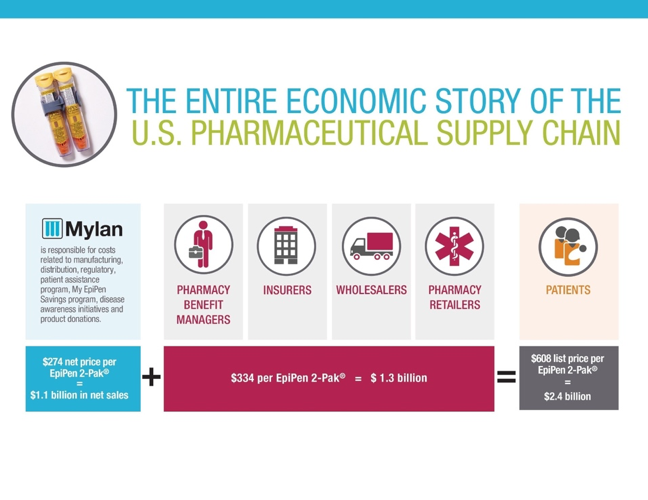 The EpiPen pricing fiasco illustrates a core truth about the pharmaceutical industry. Drug manufacturers and pharma supply-chain companies seek competitive advantage (and high profits) more in the halls of Congress than in the marketplace. That explains why the pharma industry spends roughly twice as much as other industries on political lobbying. The industry employs over 1000 lobbyists, more than 2 for every member of Congress.[6]

Under pressure, industry participants are turning their fire on one another. A recent New York Times article[7] chronicles an example of this internecine warfare after hundreds of independent pharmacists descended upon Congressional offices to chastise pharma’s “middlemen” for high prescription drugs. They carried pamphlets portraying PBMs as “sharp-tooth dogs, grabbing bags of money.”

Express Scripts, the nation’s largest PBM, was ready. Through a conduit (Ask Your Independent Pharmacist) they sent a blast e-mail to the same Congressional offices implying that independent pharmacists cared more about their pocketbooks than their patients.

Representative Lloyd Doggett of Texas sees this as progress:

“We have moved from ‘There is no problem’ to ‘It’s not my fault. It begins to focus attention on what so many of my constituents already know the problem is, which is price gouging.”[8]

The effort by pharma’s incumbents to maintain artificially-high prices through legislative fiat is “indumbent” thinking in action. Rather than delivering higher-value services to customers, indumbent companies are doubling-down on traditional business strategies to maintain near-term advantage. They’re missing the threat posed by new disruptive competitors that are not burdened by legacy infrastructures and business practices. Indumbent pharma companies are vulnerable.

The fox knows many things,
but the hedgehog knows one big thing.
–Greek philosopher Archilochus, 700 BC.

Amazon CEO Jeff Bezos is a classic “hedgehog” strategist. He runs his company according to one core principle: pursue strategies that deliver value to customers no matter what. Every Amazon meeting contains an empty chair to represent the consumer.

When Amazon entered the book publishing business, their worldview was both simple and devastating. The only irreplaceable components of the “book business” were authors and readers. Amazon’s technology could diminish and even replace publishers, distributors and book stores systematically by attacking each of these vulnerable supply-chain components. One by one, publishing’s middlemen disappeared in multitudes. When was the last time you visited a bookstore?

It’s not hard to imagine how an Amazon entry into the pharmacy business could unfold. It would have the following components:

Healthcare disruption will not result from technological breakthroughs alone. It will emerge through service innovation more than product innovation. This will occur as payment programs (risk-based, outcomes-focused, bundled, transparent) change incentives and as retail competitors deliver better healthcare services at lower prices in more customer-friendly venues. In this sense, an Amazon-like focus on meeting customer needs will differentiate winning companies in healthcare.

Current pharma business models are light-years away from the type of intense, retail-focused, value-driven operations needed to win in post-reform healthcare. Walmart is already in the pharma space and pursuing many of the same retail strategies suggested above. Amazon-Walmart is a powerful one-two combination for accelerating pharma disruption.