Being American: How Exceptionalism Is Transforming U.S. Healthcare 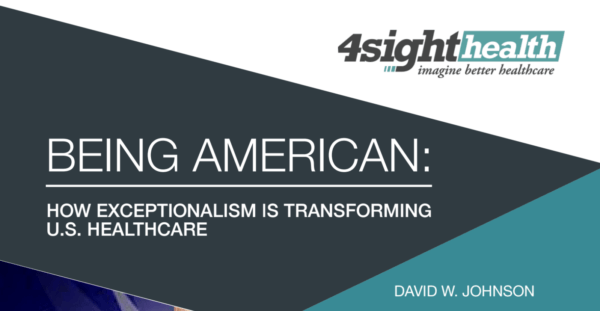 Midway through the Rio Olympics, the prowess of the diverse, raucous and remarkably talented U.S. team is on full display. We marvel at the athletes’ dedication. Their enthusiasm is infectious. Their athleticism is spellbinding. They represent America at its best, and all Americans can be justifiably proud.

It’s been one long samba line to the medals stand. With only 4.3% of the world’s 7.4 billion population, the U.S. has captured (through August 14th) almost 14% of the awarded medals.

The United States confronts no bigger challenge than fixing its broken healthcare system. It harms too many people and consumes too much national wealth. As we revel in our Olympic team’s success, it’s worth considering how American exceptionalism continuously shapes and transforms our national existence. 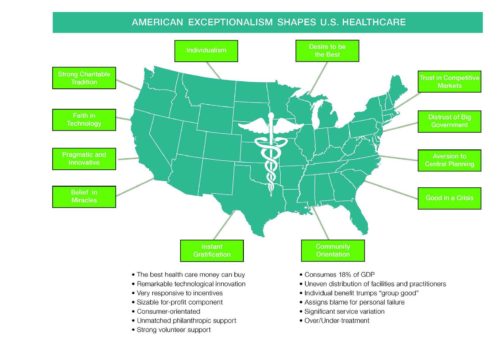 It is impossible to understand U.S. healthcare without understanding how deeply American exceptionalism is woven into U.S. identity and culture. To an extent, this is a truism. Any enterprise so expansive that it consumes 18 percent of GNP, employs millions and touches all citizens will reflect national identity and values.

Moreover, the system’s size and complexity combined with its structural anomalies (the independence of physicians, the predominance of nonprofit hospitals, the variation in third-party payment) make broad generalizations about U.S. healthcare impossible. Contradictions abound.

For example, Americans support their local not-for-profit hospitals through expansive philanthropic and volunteer support. At the same time, Americans expect hospitals to maintain financial viability and raise capital in the private capital markets. Mission collides with profit-making. Hospitals struggle to navigate between these competing currents.

In 2008, Nancy Kane (Dean of the Harvard School of Public Health) and I wrote “The U.S. Health System: A Product of American History and Values.” centered on the values chart presented above. Our analysis examined how American values have influenced U.S. healthcare’s design and operation. Oxford Press published our white paper in 2010 as part of an anthology on fragmentation in U.S. healthcare.

The values chart arrays several quintessential American values around a U.S. map and distills their positive and negative effects in bullets below the map. The relationships between these American values are complex, interrelated and deeply held. They also complicate ongoing attempts to reform healthcare payment and service delivery. 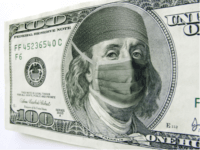 Once the Olympics conclude, America’s politically-divided populace will turn its full attention to a divisive presidential election with two deeply-unpopular candidates with polar-opposite positions on the Affordable Care Act. Hillary Clinton wants to improve Obamacare. Donald Trump wants to obliterate it.

During this election-charged policy debate, it is timely to revisit how American values influence American healthcare. These values reflect inherent tensions embodied in the political debate regarding access, value, transparency and government’s proper role.

Beyond political rhetoric, these core American values shape our national attitudes, dialogue and policies regarding healthcare reform. In this sense, the Democratic and Republican parties actually agree more than they disagree.

Let’s examine the following four from the values chart presented above: individualism; distrust of big government; good in a crisis; and faith in technology.

Distrust of Big Government: Revolutionary war patriot and author Thomas Paine captures the sentiment concisely in this quote, “that which governs least governs best.” Americans are uncomfortable with large, centralized government programs. Unlike over 40 other countries and despite several attempts (most notably in 1948 under Truman and 1994 under Clinton), the U.S. has never enacted national health coverage.

American medicine has a remarkable history of discovery and innovation. At the same time, Americans lead unhealthy lives and expect surgical procedures and pills to solve resulting medical problems.

Americans’ energy, instincts, individualism and impatience have shaped our healthcare delivery system. In response, the system has ballooned into an acute-care-centric delivery model that is financially unsustainable.

Even more alarming, the American healthcare system fails to address the country’s most pressing health need: exploding chronic disease. Paradoxically, there is ample funding in the system to amputate a foot, but limited funding to manage the diabetes that necessitates the amputation. 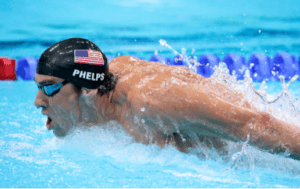 It’s implausible to believe Americans will accept healthcare rationing. It’s not in our DNA to do so when American ingenuity can create business models that align payment with efficient delivery of superior healthcare services. This is already happening.

Like America’s Olympic athletes, America’s best health companies are not satisfied with incremental improvements on a flawed delivery system. They’re focused on winning. Their relentless efforts will lead to the following transformational shifts in U.S. healthcare: 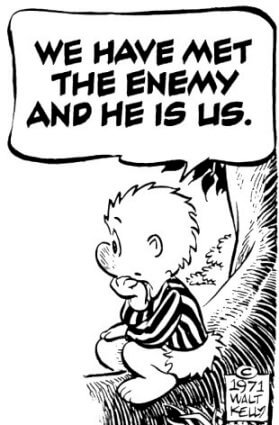 Rampant Irony: “The Enemy is Us”

People around the world admire and often seek U.S. healthcare. For complex acute conditions, American healthcare is the best money can buy. Overall, however, the American healthcare system is defective. It is unwieldy, unfair and ineffective against chronic disease. It leaves too many citizens unprotected, unduly rewards vested interests and causes too much physical, emotional and financial harm to patients.

Failure to address the U.S. healthcare’s structural flaws weakens America’s global competitiveness, reduces its standard of living and contributes to widening socio-economic disparities. These unfortunate results represent an ironic manifestation of American exceptionalism. As the famous Pogo cartoon observes, “We have met the enemy and he is us.” 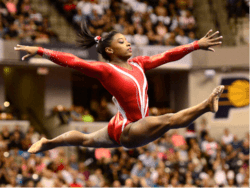 Throughout history, Americans have responded to crisis with determination, creativity and bold action. If Pogo is right, it’s time to dig deep, acknowledge failure, learn from it and relentlessly improve service delivery. A new American healthcare system must center on “tried and true” market principles that reward value creation.

It’s not enough for American healthcare to become as good as that provided in other advanced economies. With breakthrough business innovation, American healthcare can leapfrog their centralized healthcare systems with better resource allocation, more innovative solutions and greater customer engagement.

As in the Olympics, results are what counts in healthcare: better outcomes; lower costs; greater convenience; healthier communities. Multitudes of athletes aspire for Olympic glory, but only a select few experience it. The rest of us live vicariously.