Almost every healthcare “transformation” discussion includes Kodak’s cautionary tale – how the once iconic company fails to embrace digital imaging, capsizes and drowns. The story’s moral is to embrace disruption, reinvent care delivery and thrive in the post-reform marketplace. Easier said than done.

It’s a widespread misconception that evolution results in “survival of the fittest.” Evolution actually causes “elimination of the weakest.” In business, companies that collaborate, pursue competitive advantage and keep customers’ interests first are most likely to “survive.” Strong companies that fail to adapt lose competiveness and market relevance.

Approaching the new millennium, Kodak and Fujifilm expected a slow, manageable decline in film sales. They adjusted by selling digital cameras and aligned services (e.g. photo kiosks). The unanticipated popularity of cell phone cameras decimated demand for digital cameras. This created an “adapt or die” moment for both companies. How each responded is illuminating.

Fuji was always the “other “film company. Based in Japan, it never matched Kodak’s cache and brand strength. Despite equivalent quality, Fujifilm sold at a significant discount to Kodak. As an aspiring photographer with limited budget, Fuji was young Gaurov’s film of choice.

In contrast, Fuji embraced the digital transition and became the market leader in digital cameras. Strong leadership and effective movement into other business lines turbocharged its performance. When Shigetaka Komori became Fuji’s CEO in 2000, film generated sixty percent of the company’s profits, yet he chided the film divisions leadership for being “lazy and irresponsible” for failing to prepare adequately for the digital revolution. Here’s how Komori repositioned Fuji:

Today Fujifilm is a diversified company and more profitable than ever. Film accounts for less than one percent of revenues. In early 2012 as Kodak confronted bankruptcy, Komori described Fujifilm’s response to the disruptive threat posed by digital imaging,

“As time passes, the fact shows that when a company loses its core business, some companies are able to adapt and overcome the situation, while others are not. Fujifilm was able to overcome by diversifying.”

Leadership, culture and execution (not money, brand or market position) were the key attributes that enabled Fujifilm to succeed where Kodak could not.

Like Kodak and Fujifilm in the late 1990s, health systems know that attractive fee-for-service payment will not continue indefinitely. Value-based payment and competitors are emerging to displace health companies overly-dependent on traditional operating models. Despite this looming and disruptive threat, most health systems are not preparing to compete in market environments where the criteria for success are price, outcomes, convenience and customer experience.

Like film manufacturing in the late 1990s, healthcare delivery is at a significant inflection point. A constellation of politics, economic pressures and technological advances imperils current health company operating models. Value-based healthcare is good for consumers and good for the country. As evolution teaches, the “fittest” health companies will embrace this reality, adapt operations and thrive in the new marketplace.

Let’s give Charles Darwin the last word. He observed,

“It is not the strongest of the species that survives, nor the most intelligent that survives.  It is the one that is the most adaptable to change.” 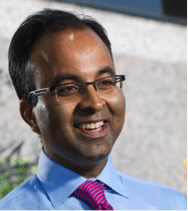 Gaurov Dayal is a physician leader with a passion for value based health care. He currently serves as SVP for Health Care System Solutions and Strategy for Lumeris, a leading population health management company.

Previously he served as the first system Chief Medical Officer for both Adventist Healthcare and SSM Health and led the division of Health Care Finance and Delivery for SSM/Dean. In this role he had operational oversight for Dean Health Plan, Navitus (a PBM) and all value based care initiatives including two ACOs and CINs.  His experience also includes founding a hospitalist company and working for McKinsey and Co as a health care consultant.