Rebels with a Cause: Venture Companies Attack Healthcare

Market Corner Commentary for September 2, 2015-Rebels with a Cause: Venture Companies Attack Healthcare

There is a meaningful shift occurring in healthcare private equity and venture investing.  The “smart money” is  moving into services and provider-based services.  Given the inefficiency of U.S. healthcare delivery, entrepreneurs believe healthcare is a “target-rich” environment.

Lost in macro-sector analysis are the personalities of individual health companies.  Most  early-stage companies make incremental improvements on existing systems.  Efficiency, ease of use and lower costs are their differentiating characteristics.

These founders are “Rebels with a Cause” and they’re at the vanguard of market-driven healthcare reform.  Their visions, rhetoric and business models align with customer and societal demands for better, more affordable and convenient healthcare services.

Ignore these “Rebels” at your own peril.  They’re intent on tearing down America’s under-performing, activity-based, consumer-resistant healthcare  system.  They intend to replace it with products and services that deliver better healthcare to customers at lower prices.  Their companies will reinvent and transform American healthcare.

This Market Corner Commentary recognizes six “Rebels” and their companies.  Their personal stories are compelling.  Their commitment to providing better healthcare is absolute.  Their company business models are disruptive.  Their potential is enormous.

Six “Rebels with a Cause”

Suparna Ferreira left her cushy job Sutter Health to form Bienestar in 2013.   Having made her own journey to better health, Suparna yearned to create a company that did the same for others, particularly low-income individuals.  Under her leadership, Bienestar has developed a highly effective, experiential, community-based, scalable program that changes lives.

Despite not speaking Spanish and having a very supportive husband in Sacramento, Suparna moved to Guadalajara, Mexico to launch Bienestar’s programming.  Guadalajara provided a low-cost site to refine the company’s “train-the-trainer” model and would benefit  enormously from Bienestar’s services.  Obesity levels in Mexico are exceptionally high.

Bienestar has graduated two classes and is launching a third.  As an investor in  Bienestar, I attended its first graduation ceremony.  There is nothing more powerful than witnessing regular people, most afflicted with chronic disease, gain the knowledge, tools and confidence to tackle their healthcare challenges.  Bienestar plans to expand into the U.S. in 2016.  Go Suparna!

HealthEngine’s  physician-founder Jonathan Weiss has enough kinetic energy to power the City of Chicago.  Jonathan is a serial entrepreneur who cut his teeth privatizing medical services and empowering physicians in Great Britain.  He envisions HealthEngine will connect doctors with customers through bundled payment arrangements.  Think Uber for routine medical services.

With a Fortune-500 anchor client, HealthEngine launches this month in Chicago.  The company will arrange transparent, user-friendly imaging, diagnostic and surgical procedures at competitive prices.  The wider the gap between reimbursable rates and market prices, the greater the opportunity for HealthEngine to generate savings for customers and incremental income for physicians.

Rushika launched Iora Health in 2011 to reinvent and disrupt primary care delivery in the same way Southwest reinvented and disrupted the airline industry.  Iora’s model focuses on the whole person, treats root causes of disease and emphasizes wellness.  Everything is different: no fee-for-service payment; doctors tailoring services to patients and communities; a self-built electronic medical record; and care teams consisting of doctors, nurses and health coaches.

Jim Harding is as eccentric as he is brilliant.  He raises yaks on his farm outside Seattle, trims their hoofs while singing Broadway show tunes and rides saddled yaks into town.  Jim is a legendary technologist.  He created DOS, Microsoft’s original operating system.  He also created Amazon’s competitive bidding platform.  He solves technology challenges by simultaneously attacking inefficiency and latency.

Microsoft, Google and other major technology companies have failed in healthcare because they didn’t appreciate the complexity and idiosyncrasies of health company operations.  Recognizing this, Jim launched MultiScale Health Networks in partnership with Providence Health & Services.  For the last three years, MultiScale has operated within Providence and built a predictive, cognitive and collaborative technology platform that optimizes performance and decision-making within existing clinical systems.

When fully functional, Jim believes MultiScale’s technology platform will revolutionize clinical decision-making at the point of care.  I believe Jim will realize his vision.  By contrast, my vision is having Jim name a yak after me.  Go Jim!

Randy Williams proves that silver-haired professionals can be Rebels too.  Randy’s cool demeanor and cerebral orientation mask a burning passion to improve care coordination through enhanced patient engagement.  Randy knows care coordination inside out.  He is a thoughtful and prolific writer on behavioral psychology, social determinants of health, value-based care and accountable care business models.

Pharos works with multiple partners throughout the country to advance patient engagement and care coordination.  Mercy Health partnered with Pharos this year to manage their large and expanding risk-based populations in Ohio.  Early results are very promising.  Pharos is efficient, effective and profitable.  Randy is planning a major expansion for 2016.  Go Randy! 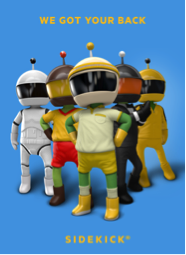 As a medical doctor and graduate student at the Harvard School of Public Health,Tryggvi Thorgeirsson became fascinated with behavioral economics and its potential applications in health and wellness.  To deepen his understanding, Tryggvi co-wrote a scholarly article on behavioral economics and lifestyle interventions for a March 2013 issue of the American Journal of Preventive Medicine.  Daniel Kahneman’s research on System 1 (intuitive) and System 2 (deliberative) cognition has been particularly relevant in Tryggvi’s research.

Upon returning to his native Iceland, Tryggvi realized that most wellness applications rely on System 2 thinking while System 1 thinking governs most behavior.  Building on this insight, Tryggvi launched GoodLifeMe and created Sidekick, a playful mobile app that employs sophisticated System 1 motivational techniques to engage users in “fun, friendly and personalized” wellness activities.  Sidekick is mobile wellness for the rest of us.

Sidekick is catching on in Europe and Asia while undergoing rigorous testing.  Sweden’s largest occupational health organization is employing Sidekick with promising early results.  A large U.S. retailer is evaluating the product for an expected trial.  GoodLifeMe plans to launch Sidekick in the U.S. next year.  Wellness may never be the same.  Go Tryggvi!

4sight Health will recognize and celebrate healthcare’s “Rebels with a Cause” in periodic commentaries and on our website.  Their courage and audacity give me confidence that America’s broken healthcare system is beginning to mend.  The power of bottom-up, market-driven, value-based reform is unstoppable.

I encourage all healthcare professionals to identify, celebrate and spotlight promising health companies – new and old; big and small.  Shake their hands.  Learn their stories.  Spread the word.  These “Rebels” will transform American healthcare and make the United States a better, fairer, more productive and healthier place to live, work and play.